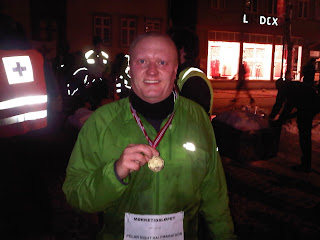 It was certainly challenging with a temperature of -7 degrees, darkness and a track that was a mixture of ice, compacted snow and the odd snow drift for good measure. The race was ran on footpaths, which were only partly lit by street light, the remaining sections were lit by candles (what looked like IKEA Citronella candles actually). Saw my first ever multi runner pile up on an icy bend near the start, but all seemed to be uninjured. The route was also quite hilly, especially the first 3 miles and last 3 miles.

The route took you from Tromso City centre out to the airport, were a large cone in the middle of the path had the sign “halfway point turn around here”. Managed to stay on my feet, avoid frost bite and finished with a respectable 2:07:30.

Still haven’t seen the Northern Lights yet which is disappointing, but hopefully tonight.

Next race will be a little warmer in Morocco.

Thanks again for all the support and keep the sponsorship coming in,