If Carlsberg did half marathon weekend (almost). A weekend in Italy, A Formula One Circuit, A Favourite band in an Outdoor Roman Amphitheatre and a Half Marathon, what possible could go wrong.


We arrived late Friday night in Milan, too late even for a drink in the hotel bar L. Saturday was spent exploring Monza and collecting my number. I ended up with number 36, worrying almost elite status. Then a 2-hour drive in the evening to Verona where we had arranged to see one of my favourite bands, Marillion play a gig in an ancient Roman amphitheatre. The Gig was one of the best we have seen, the only downside being the 2-hour drive back to Monza at 11pm at night. Arriving back at the hotel 1am, alarm was set for 7:30am for breakfast and the run. 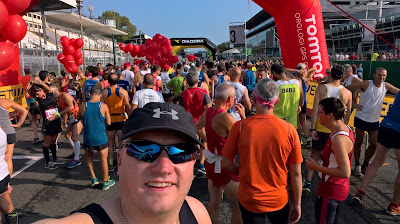 At the Start of the Race


Weather was brilliant for a beach holiday, but worst case scenario for a half marathon. 32 degrees, clear blue sky and no shade. Many of the Italians were complaining about the heat, which suggested it was the usual weather they expected at this time of the year.


The run started on the start line of the Monza Grand Prix Circuit. The route then follows the circuit for around three quarters of a lap before turning off into Monza Park, the large public space in which the Monza Circuit is located. There were 4 distance options 5k, 10k, 21k (the half) and 30k. All runners started together with the 5k completing a single full lap, the 10k taking in the inner banked circuit while the longer distances took to the paths of the park. 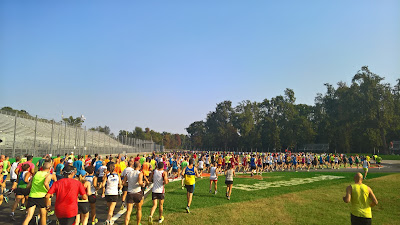 The First Chicane at Monza


The heat was intense after 5k I started to see what I would consider as “elite” athletes pulling out and walking back to the start. I took the decision to make sure I took on as much water as possible to try and keep hydrated. Over the 13.1 miles I drank 3 litres of water, but the heat still caused me to vomit on 4 or 5 occasions. This was a tough run. 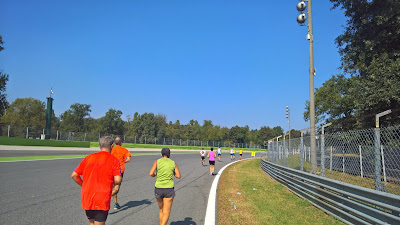 Eventually we turned 90 degrees and re-joined the main circuit with only the long last curve and finish straight to complete. What the week before took Lewis Hamilton a matter of seconds, took a very weary middle aged runner a significantly longer time, but I made it in around 2hr 35 minutes. One of my slowest half marathons, but in the toughest conditions I have ever ran. 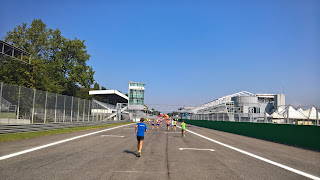 
What was unusual in Monza was the lack of running tourists, I normally see a number of UK running club vests on my travels, but in Monza I didn’t come across a single other Brit.


A lovely receptionist in the hotel who let us have late checkout after the race, a wonderful Italian Pizza alfresco in Monza on the Sunday afternoon all made for a great weekend. We certainly rejuvenated our love of Italy.


Now for a rest and start to prepare for 2017 and the final push to 50 Half Marathons. I have already booked flights to Luxembourg at the end of April, not I just need to arrange runs in Germany, Austria and Denmark, plus a wildcard race and then up to the Arctic Circle in January 2018 for the final run.
Posted by RunningMan at 21:03 No comments: