Lisbon - No. 9 complete and the toughest race yet, hot crowded, badly organised and ill. 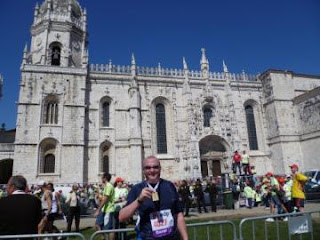 Just finished the 21st Lisbon Half Marathon and found it the hardest yet, but it is done and only one left now in the challenge.

First problem was health, I have been ill for a week or so, and only to go ahead to fly on Tuesday (didn't mention to the doctor that I was running!). A diet of antibiotics, ibruphrofen and paracetamol isn't the best running preparation, but hopefully all will be sorted for Prague.

The Portuguese organisation left a lot to be desired. The Half Marathon coincided with a 7k walk, which was to start 15 minutes after the race, most entrants decided to join the run start. This resulted in 2 miles of runners, push chairs and ramblers all mixed, which isn't good. The result was first mile in around 12 minutes, instead of the usual sub 9 minutes. The problem repeated itself at 7 miles when the 2 events converged again. Even though the 2 groups were supposed to be segregated, the walkers all like the runners side of the road.

The final and biggest issue was the weather, as I passed the 19km marker there was a sign showing the temperature as 85 degrees or around 29c. On top of this no shade and no wind. The heat completely saps your energy

Finally hobbled over the line after 2 hours and 23 minutes, more tired than I have been from any other run.

Good luck to John and Neil who are off to the Sahara desert in 2 weeks, I hope it isn't too hot!!

Less than 2 weeks now to last race, hopefully Prague will be a little cooler.

Thanks for the support, we have now raised over £14,000 which is amazing

Time for a well earned beer

Nigel
Posted by RunningMan at 15:14 No comments:

Made it to the start, 5 minutes to spare. Its bloody hot and forgot both hat and suntan cream! 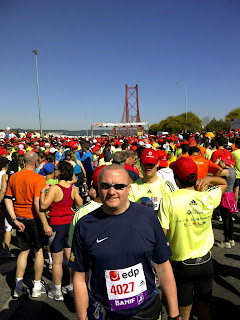 Posted by RunningMan at 10:23 No comments:

Lisbon half marathon chaos. Queue to get to the start. 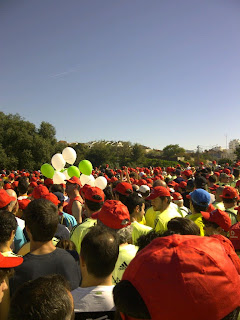 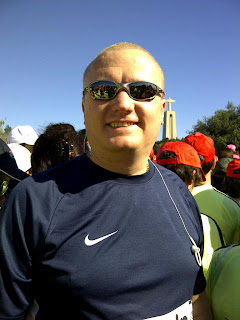 Looking like a long day in Lisbon. Start in 30 minutes, hotel 2 miles from start, have been travelling to get here for 1 hour 45 minutes already and still can't see start. To make it worse it is 24 degrees and blazing sunshine (sorry England)

30000 Portugal residents all trying to get to the start, plus at least one mad Englishman. Makes the Great North Run look quiet.

Posted by RunningMan at 10:04 No comments:

Quote for the day "A race time is just the final page of a book. It means very little without knowing the story leading up to it"

Posted by RunningMan at 07:44 No comments: