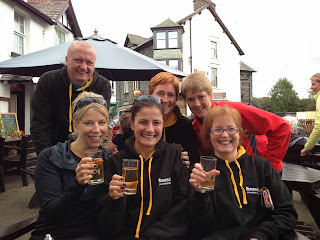 Saturday 12th October I completed Half Marathon number 26 (well actually slightly more than a half marathon), 14 miles around Lake Coniston. This is the 3rd year running I have completed this run and I managed to knock 14 minutes of last years’ time, so another PB in 2013. It was a lovely run in, relatively warm weather for the time of year, followed by a number of pints of Coniston Bluebird to ensure I rehydrated at the end. The photo is a few of the Blackhill Bounders enjoying a beer at the end.
Next Half will be in the new year, 6 done this year, target for 6 more in 2014

2 more half marathons completed since my last post and 2 PB’s achieved.
I took part in the Northumberland Coastal Run on 14th July, which is a tough run from Beadnall to Alnmouth on a mixture of beach, coastal tracks and some roads. Back in 2011 it took me 2:26 to complete this tough route, this year I managed to get this down to 2:18. A great run and one I will definitely do again.
To follow this I took part with 56,000 other people in last weekend’s Great North Run. This was my 6th attempt at the biggest half marathon and my previous best was 2:09:56 back in 2010. This year proved to be my best yet with a finishing time of 1:59:57, a full 10 minutes faster than my previous best and my second fastest half marathon to date. A happy day out. One more half marathon left this year which is the Coniston 14 next month

Posted by RunningMan at 20:37 No comments: 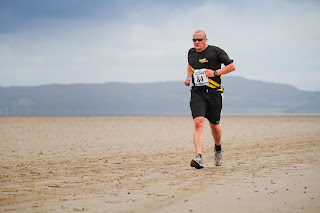 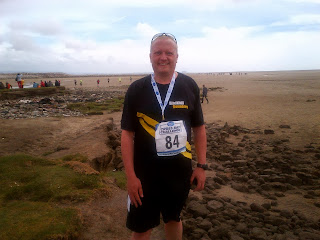 Another half marathon completed on Sunday, The Cross Bay Challenge for the 2nd year running. The conditions were much improved this year with better weather and a tail wind rather than a head wind all of the way. It is still one of the most unusual runs in that it is all on sand and water. 2 major river crossing, one of which is ¼ of a mile wide and over knee deep, this tends to slow your pace down. I still managed to scrape in under 2hrs 7 minutes, which was 32 minutes faster than last year. Made the right choice using an old pair of trainers that are now off to be recycled! Next long race is the Northumbria Coastal run in July
Posted by RunningMan at 07:42 No comments:

Another day another half Marathon, this time the Half Marathon of The North around Sunderland. After a heavy week of entertaining, I wasn't expecting a great run but managed a credible 2hrs 6minutes. This was partly due to fear that my trainers would be pinched in Hendon if I didn't speed up.

The next question is can I do another 28 half marathons in the next 4 1/2 years thus achieving 50 half marathons before my 50th Birthday. Got to be worth a go. Watch this space....

Posted by RunningMan at 16:15 No comments:

It has been a while since I last updated the Runningman blog, since the Great North Run last September I have kept running, but no half marathons to talk about. I had planned to do the Brass Monkey Half in York in January but it was cancelled due to snow.

2 weeks ago I ran the Northumberland half marathon in Ponteland, a really enjoyable run through the Northumberland countryside, made slightly harder by snow and hailstones. Still management under 10 minute miles throughout to complete it in around 2:08.

Ponteland was a walk in the park compared to today's Cumbrian Commotion in Grizedale forest. According to Cumbria Police you shouldn't travel to the Lakes unless absolutely necessary, so ignoring this advice the Elddis Off Road Truckers, myself, Mark and Richard set off for an extreme triathlon. The weather was certainly challenging, even the trusty Land Rover got a modified wing when it went off the road in the ice trying to get to Grizedale start. For safety reasons the biking section was slightly reduced, but the race still involved a 1.5 mile run, mostly up hill and all on snow and ice, followed by 1 1/2 hours mountain bike through Grizedale, a 3 mile trail run over the mount to Coniston, a 3 man kayak around a course on Coniston water, a run back over the mountain back to Grizedale to finish with an assault course. Easy?

I stopped counting how many times I fell off the bike after I got to ten, I face planted in the snow running, slipped over in a river, waded in freezing water in Coniston, but the team still managed a respectable 3:22. Now enjoying several pints in my favourite pub in the Lakes to rehydrate...
Posted by RunningMan at 16:24 No comments: