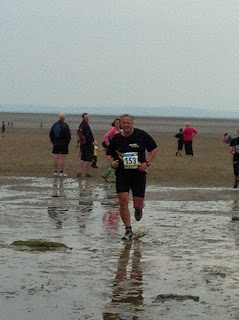 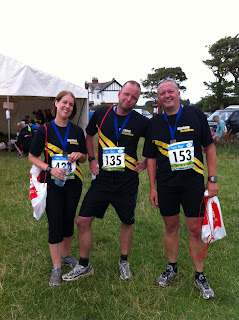 Another day another Half Marathon. Ran the Cross Bay Half Marathon, which is one of the most unusual races, and has been voted one of the best runs in the UK. It basically runs across Morecambe Bay when the tide goes out. I should have known there was an issue, when the pre-race briefing mentioned the quick-sand if you veer off the course.

First couple of miles went well, on sand but quite hard packed, so not to bad to run on. Then at around 3.5 miles the water started, the routes became slightly wet, around 1 inch to 2 inch of water for the next mile and a half. This was compounded by a head wind that lasted the full race and rain that felt like hail coming straight at your face. That was fine, then it got slightly more difficult when we had a ¼ mile wade through water that was at times almost waist deep, not what you normally expect on a half marathon. Another 7 miles and another couple of rivers to wade through and finally made it to the end 2:39 minutes after starting. The slowest half marathon too date, but ran every yard it was possible to run and felt that was a pretty good time considering the conditions.

I now have a case of trench foot but thought it was a brilliant event. Maybe next year again?

Posted by RunningMan at 21:04 No comments: