The rain in Spain falls mainly on the Benidorm Half Marathon. No 5 completed over the halfway point. 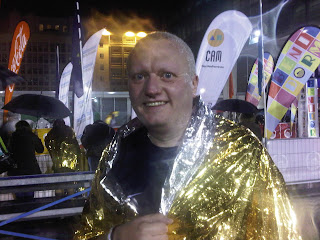 Moist is not a word that could be used to describe the weather in Benidorm for the half marathon. After 2 days of lovely weather a few hours before the race the heavens opened and remained open throughout the race.

The route was 2 1/2 laps of a course along the sea front. Didn't see a lot as with a 6pm start it was dark as well as damp.

At the end I was absolutely soaked to the skin (I have had dryer baths!) But still managed a respectable 2hrs 2minutes.

Had my support crew with me, thanks to Victoria, Mark and Marie who drank and cheered and drank some more. It was also nice to see fellow Blackhill Bounder, Bryan also running. 2 great high five moments as we passed each other at 6km and again around 16km.

Now sitting in a Tapa's bar in Denia having a very large beer and some traditional Spanish cuisine.

Next race Majorca in 2 weeks time. I may have dried out by then.